Types of method of plotting in surveying


Types of the method in survey plotting

INTRODUCTION:- Plotting work is most important after field survey work. It has office work of a
surveyor. The main aim of plotting is the preparation of plans and sections according to field survey

notes. The plotting is completed by the surveyor or his jurisdiction. All types of surveying finished
after plotting complete.

The following points kept into the mind during plotting.

METHODS OF PLOTTING A TRAVERSE SURVEY

In the above table, the bearing and length of the lines are given. For drawing the traverse first draw a north-south line. Keep the protector on the line like 0 ° and 180° of the protector coincide with the north-south line of paper. From point A read the angle 140°12’ in the clockwise direction. Point the reading with a pencil and draw the line AB 76.80 on a suitable scale.

Now draw the north-south line at point B with the  SET SQUARE  by the parallel method and draw a line BC mention upper method. Complete traverse draw CD and DA by the mentioned upper method.

In this method, the north-south line is drawn on point A, and the bearing and length of AB drawn with the help of protector and scale. At a point, B keeps the protector and marks the point of the included angle between AB and BC and the length of BC is drawn on a suitable scale. Repeat the process and draw the line CD and DA.


SEE ALSO:- HOW TO CALCULATE CO-ORDINATES

For drawing point B whose coordinates are (-59.00,49.16). The latitude of point B is -59.00 then it shows the latitude is the negative direction or southing direction and departure is positive or east direction. Place the single set square coinciding the line AYY, and point the length 59.00 in a negative direction. Keep the other set square right angle to AYY’ and measure the length 49.16 mt in the X direction on a suitable scale point the B.Join the line AB. Repeat the process and mark points C and D . Join the line BC, CD, and DA and complete the traverse.

The rectangular coordinates method is the most accurate method of drawing

The creation of cropped surface required a   tin surface . After opening the tin surface drawing go to the home the create ground data pa... 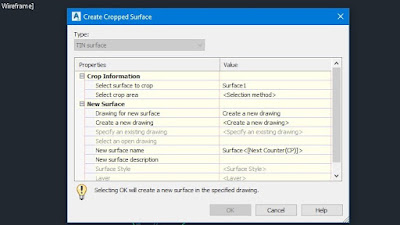